JEDDAH: Saudi Arabia announced Tuesday a six-month amnesty for the hundreds of illegal foreigners overstaying their visas, saying they would be allowed to leave the Kingdom without punishment. 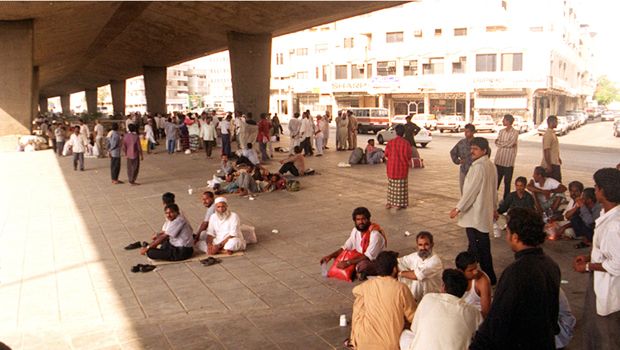 People who are waiting for Passport Dept. to arrest them and Deport to their home country

The Interior Ministry said the amnesty would cover those who arrived in the Kingdom on Haj, Umrah, visit or any other type of visas which had expired, or violated Passport Department regulations.

“They have been advised to complete the necessary procedures for their departure by reporting to the nearest Department for Foreigners’ Affairs (Wafideen) from Sept. 25, 2010 to March 23, 2011,” the ministry said in a brief announcement.

The ministry has advised all overstayers and other illegal aliens to benefit from the pardon and leave the Kingdom before the grace period. “Violators caught after the grace period will receive tough punishment including jail and fine,” it added.

The ministry warned that those who transport or shelter or employ overstayers would also receive severe punishment including fines, imprisonment, vehicle confiscation and defamation (through publication of their photos in local newspapers).

The declaration of the amnesty comes two days before the Kingdom’s National Day, which falls on Sept. 23, when Custodian of the Two Holy Mosques King Abdullah usually declares amnesty for a large number of prisoners, including Saudis and expatriates, arrested for petty crimes.

Expatriates expressed their happiness over the amnesty as many of them have been facing difficulty sending their families, parents and relatives to their respective countries, following the expiry of their visas.

“We have been awaiting this royal gesture for quite a long time,” said Nasseruddin, an Indian, who could not send his overstaying family fearing that he would be either fined or jailed or deported for keeping them after the expiry of their visit visas.

Abdullah, a Tunisian living in the Kingdom for the last 15 years as a barber, was extremely happy over the royal decision. “My wife and children came to the Kingdom five years ago on visit visas. I was not able to send them back fearing punishment.”

He added: “I know that there are hundreds of people like me who could not send back their families fearing tough punishment.” The amnesty will encourage all these expatriate workers to send their overstaying families back home and continue in their employment without facing deportation or any other punishment.

According to foreign diplomats and travel executives, the number of overstayers in the Kingdom has decreased considerably in recent months as a result of the new fingerprinting system and stricter Umrah rules.

Cahyono Rustam, consul at the Consulate General of Indonesia in Jeddah, said only 20,000 one-way passports were issued by his mission in 2009 against 24,000 in 2008. “Going by the monthly record, this year the figure is likely to be further down,” he added.

Saudi authorities have been grappling with the problem of overstayers for the past several years with little success. Jeddah is considered a magnet for illegal aliens being a commercial and employment center near the holy city of Makkah.

Saudi government officials have been seeking ways to resolve the problem as the expense of deporting overstayers lands squarely on Saudi Arabia. The Kingdom spends SR420 million annually to send overstayers back to their home countries.

More related to this at my Blog

Yasir Imran is a Pakistani living in Saudi Arabia. He writes because he want to express his thoughts. It is not necessary you agree what he says, You may express your thoughts in your comments. Once reviewed and approved your comments will appear in the discussion.
View all posts by Yasir Imran →
This entry was posted in Just-Shared and tagged Business and Economy, Consul (representative), Deport, Expatriates, Expatriates in Saudi Arabia, Government, Illegal Expats, Interior Ministry, Jeddah, Middle-East, Saudi Arabia, Saudi Government. Bookmark the permalink.