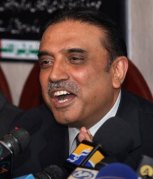 This seems a little bit crazy but it is true, Pakistan government is not killing Talibans, This is the opinion of people who’s relative or friends living in northern areas of Pakistan. It has been reported that Pakistan Army is exactly not killing the real Taliban but just killing civilians, they are destroying the homes of innocent, killing their women and childern. The army avoids to go near Taliban hold area.

They are wondering in their tanks on streets all the day and when they have to present some killings, they kill innocent. They kill a person with beared claiming that the person belongs to Taliban.

Well, when you will do like this, any body whose family got killed becomes a bomb, then for Extermists it is very easy to misguide such a person and make him perform a suicide attack.

The people who got control of all this, like army generals and Governement officials must think that no government lasts forever, if today you are in power, tomorrow you must leave, then you have to pay for your deeds. If you are responsible of killing a single human you have to pay for that. So don’t make such a crulity today that tomorrow you couldn’t justify in front of Allah.

Yasir Imran is a Pakistani living in Saudi Arabia. He writes because he want to express his thoughts. It is not necessary you agree what he says, You may express your thoughts in your comments. Once reviewed and approved your comments will appear in the discussion.
View all posts by Yasir Imran →
This entry was posted in News and tagged Regional, Suicide, Suicide Attack, Taliban, USA, War on Terror. Bookmark the permalink.

2 Responses to Pakistani Govt not killing but making Taliban